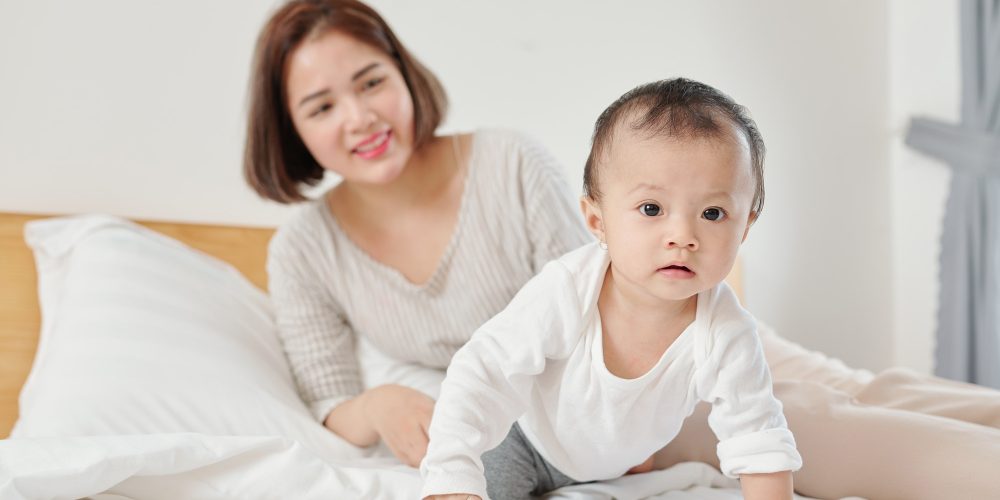 I am not a morning person, nor have I ever been. How I got through waking up for early morning swim practices and jumping into a cold pool at 5:00 A.M., for 16 years, is beyond me! Did it help “train” me to get ready for the early morning wake ups once I became a mother? NO. It was not easier at that time either. Emmett was the king of waking up early when he was a baby, so I experienced my fair share of unwillingly rising before the sun.

The typical circadian rhythm wake up time for babies is between 6:00-7:00 A.M. Anything before 6:00 A.M. is considered an “early morning wake up”. I want to provide you with some reasons and tips your baby or child may be waking up too early so you do not have to suffer through those dreaded early morning wake ups.

1. Teach Your Baby Independent Sleep Skills: Between the hours of 4-6 A.M., we are cycling in and out of lighter stages of sleep more frequently, increasing the chance your child will wake up during these transitions. During these hours, baby’s sleep drive is lower, so he is not feeling as tired. About three hours prior to when we are naturally prone to waking up, our bodies start secreting a hormone called cortisol. Cortisol is a stimulating hormone, and is also produced in times of stress in order to elevate the heart rate and stimulate the nervous system, but in the morning, it’s just trying to get us started for the day. Cortisol can be thought of as mother nature’s caffeine. Assuming your baby’s circadian rhythm is scheduling a 6-7 A.M. wake up, then her body starts to secrete cortisol a few hours prior to that, and at this point, the melatonin production has ceased for the night. So baby hits the end of a sleep cycle and begins to cycle in and out of REM sleep, or lighter sleep, more frequently, most likely causing her to wake up during these transitions. Obviously, babies can not tell time, so the best thing you can do to alleviate this problem is teach your baby how to fall asleep independently so they can get back to sleep on their own during these more frequent, lighter stages of sleep.

2. Check Sleeping Environment: The combination described above, cycling in and out of lighter stages of sleep more frequently and the body producing cortisol in the early morning hours, can cause the slightest change in our child’s environment to stimulate them enough to wake up too early. The noise from birds chirping, a garbage truck, mom or dad getting ready for work in the morning, etc. can wake up a sleeping baby in the early morning hours. Additionally, a small ray of light coming through the window has the same effect, signaling a direct message to your baby’s brain that it’s morning time. If your baby does wake up to a sound or light coming in the room, it is harder for them to get back to sleep during this time because their brain thinks it is morning. This is why I recommend a white noise machine to block out environmental noise and having black out curtains or blinds. If your baby does wake up, wait a few minutes to respond to see if they fall back to sleep on their own. If not, go in, use your usual method to get them back to sleep, but keep them in their bedroom until your designated wake up time.

3. Your Response: When your baby or child does wake up between 4-6 A.M., what happens during this time? Your response could be motivating them to continue this trend. If your baby wakes up and gets milk immediately, this could motivate her to continue waking up during this time. Obviously, feed your baby when they are hungry, but try to add a buffer of time in between their wake up and feed time. A buffer could be changing their diaper first, offering solid foods, or saying good morning to others in the house. Likewise, if your older child is getting to watch their favorite cartoon or play on the iPad when they wake up, this will not motivate them to sleep until 7:00 A.M.!

4. Late Bedtime: Following age-appropriate wake windows can make a world of difference in early morning wake ups and frequent night wake ups. If your child is overtired from the day and night before, this could cause early morning wake ups. This includes going to bed too late. You would think going to bed later would allow your child to sleep in later, right?! Unfortunately, this is most often not the case. If a child is going to bed overtired or too late, it is harder for them to fall asleep initially, and once they do fall asleep, the sleep is more restless, including more tossing and turning, often times leading to waking up too early.

Follow this guideline for age-appropriate wake windows to avoid the continuous overtired cycle.

As you can see, there are many factors that come into play for this common sleep issue. I would be happy to help look into your specific sleep situation in more detail: https://SleepytimeConsultant.17hats.com/p#/scheduling/hhscvvnwrzthfptbpfrzdrfpffspztww